Hey y’all! I’m Kendra, artistically known as, KeShaJo.  If you’re wondering about the pseudonym, it’s a combination of my first, middle, and last names.  I’m a country girl, from a small town.  So small, there are one, two, three, four, five, six, and now seven traffic lights in the entire span of its city/town limits.  But it’s my hometown and I wouldn’t trade my native address for any busting metropolis.  As every small town native experiences, “things to do” are undeniably limited. I was bored a lot growing up, and although there was always plenty of mischief to partake in, I chose art to occupy my time.

On a junior high field trip to a newspaper, we visited the art department and it was there that I can recall my love at first sight with design.  I saw an employee at an Apple computer, clicking and typing away.  Making circles, boxes and large type. I walked over, while the tour guide spoke to our class and asked him what he was doing.  He was designing an advertisement he told me.  And then, he proceeded to show me this large negative of a photo of records in Cyan Magenta Yellow and Black copies.  He told me I could I have it and I immediately fell in love.  I want to be a commercial artist! (that’s what they called it then).  That moment was embedded in my mind and became a budding interest that would readily show up and blossom at my undergrad, Hampton University.  It was there that I pursued and graduated with a degree in Public Relations and a minor in Marketing & Advertising.  I was apart of the team behind the annual Miss Hampton University Fashion Show.  I designed the flyers and t-shirts, took the photographs of the models, and even created the music playlist for the show.  But there was always one thing I lacked during my undergrad – confidence in my artistic ability.  After graduating from HU, I pursued a degree in Art History at Virginia Commonwealth University (VCU), and that’s where I built my confidence up.  I loved art and history, and the design courses satisfied my huge appetite for expressing myself creatively.

I learned to draw from my Dad.  Every since I was able to hold a pencil I’ve been obsessed with lines.  I would sit with my father as a toddler, and help him hold the pen while he drew people in Afros & roller skates, and the infamous sharp-pointed ‘S’.  My father was also a photographer, it was his hobby.  From him, I learned to capture memorable moments.  Dibbling and dabbling in photography became a natural interest.  My mother and grandmothers were seamstresses.  As a young woman, my mother worked in Sears & Roebuck’s garment factory sewing children’s clothes.  As fate would have it, I would begin to sew clothes and accessories. 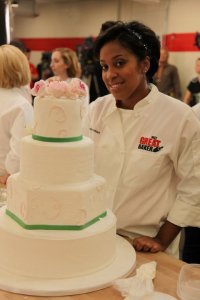 My mother also passed down to me another attribute, being a visionary.  She had this way of thinking outside of the norm.  She always said, I can envision the masterpiece, I’m just not able to pull it off artistically like you do.  Cake happened and kinda caught me off guard.  It was not on my radar, AT ALL! I took a Michael’s cake class to take my mind off of a recent heartbreak. Surprisingly, it was fun and I was really good at it. A friend convinced me to apply to a reality show that would teach cake enthusiasts how to design cakes, hosted by Buddy Valastro, aka Cake Boss. Nine months later, I was filming the first season of Next Great Baker for TLC in Jersey City, NJ.

KeShaJo is my sanctuary.  A safe place for my wayfaring artistic attitude to flourish.  An umbrella of creative gifts are produced here: from graphic design to illustration to photography to my recent affinity for brand design. I guess it’s kind of a carousel, a new creative love to showcase is always on display, and fun to ride!  While they are all my loves, I’m always discovering another love affair in creativity.  It’s a polyamorous experience.  As a young adult, I never gave myself permission to take my gift seriously.  I thought you needed a degree, a huge following, or a major city residence to be considered an artist.  But what I later discovered is that in today’s Internet age, the world is flat.  Opportunity isn’t a door or an address anymore, it’s an email, a click, a forward, a hashtag, a Tweet, an Instagram feed, a post away. The KeShaJo brand already has a virtual presence and is growing everyday.  According to scripture, “a man’s gift WILL maketh room for him and bringeth him before GREAT men.” {Proverbs 18:16}  Being in greatness, I receive…I just ask for God’s grace as I walk in the room.